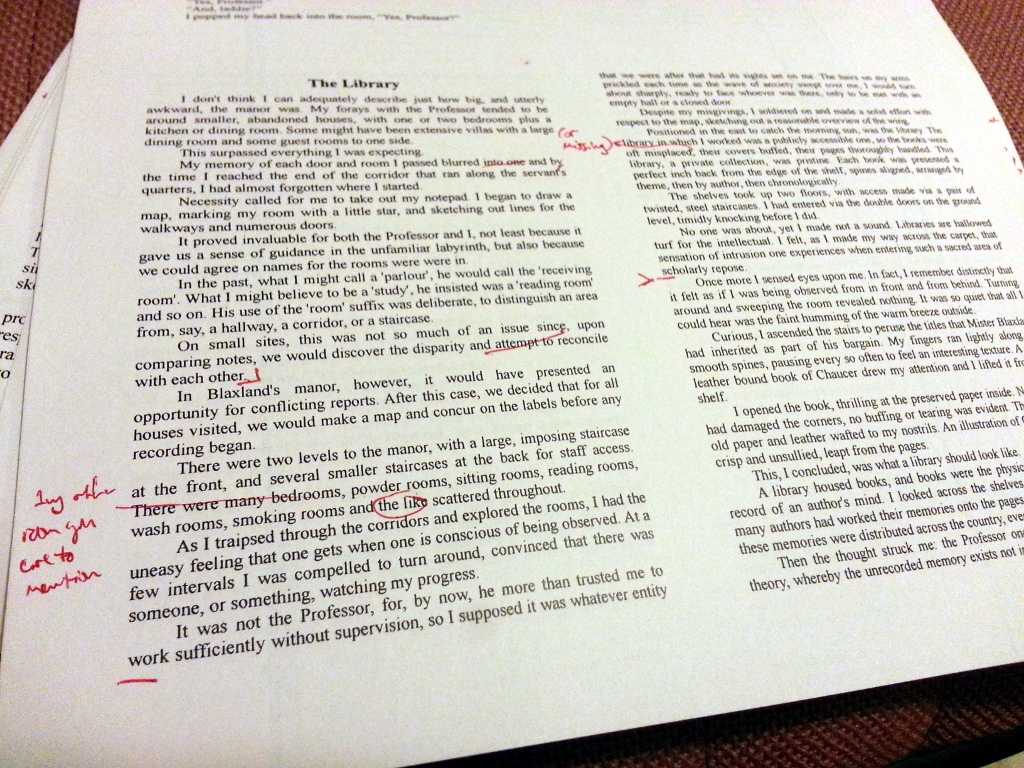 It’s a very nice red pen, isn’t it? The ink is smooth, the grip is light but firm. The colour is vibrant. How are you using it? Are you liberally applying ink to the page or are you more reserved when gracing the paper with your nib? Do you write whole sentences, or underline a word, or make a bunch of arrows surrounded by exclamation marks and stars?

That all depends on you, of course, and also to what sweep you’re on and what system you’ve got in place.

Yes, otherwise your scrawls are just that. What’s the point of sweeping through your book if you can’t understand your own editing when it comes time to sitting back down in front of the screen again?

I’ve made my own little system for the various sweeps. Take the Language sweep, for instance. The featured image shows how I’ve gotten rid of words that did not need to be there – just cross them out.

This doesn’t mean that I must get rid of the word or sentence, only that, under the cold light of editing, I felt that it didn’t belong. I make the mark and move on. I’ll fix it later. LATER. As in, when I’m done editing and I’m sitting once more in front of the monitor.

I’ve made suggestions with a scribble of a possible alternative. It’s not a full alternative, and there were many others that came to mind, but it is enough that when I look over it again, I can think, “Ah, yeah, that’s what I was getting at.” Once again, I mark it so that I can look at it more closely later.

Misspelled words, suspect words, erroneously placed words – treat them all the same. Circle, squiggle, underline, cross out, surround them in parentheses, whatever. Just bring it to your attention to look at later.

So long as you can understand your marks and squiggles, you’re golden. If you’re doing this for someone else (can I borrow you?) or they’re doing it for you (can I borrow them?), you’ll need to settle on a system.

When you’re in the editing ‘zone’, it’s damn easy to get interrupted. And distracted. And sidetracked. After all, you’re reading not for pleasure, nor for relaxation, and, let’s face it, there’s not going to be a twist halfway through.

Remember how the pages were to be bulldog clipped? Remember how I said (only about a bazillion times) to get a decent red pen? No interruptions, you can do this… Damn! Yup. There’s no hiding.

You’re going to get a tap on your shoulder regarding that important report, or a ring on the telephone from your friend who wants you to help them move their fridge, or a knock at the door by some pushy electricity salesman who won’t take no for an answer, or a little boy crying for a hug because fell down the steps (because he was wearing his Daddy’s boots and they were too big for him).

Then you sit back down and… you’ve lost where you were. You’re out of the zone. Did I correct that bit? Perhaps? Um. I think I read that bit there. Maybe.

To prevent this, go back to that trusty Red Pen of yours. Every time you complete a slab or text, make a little wedge mark under that line. There, the document has been swept up to that point. Boom! Interruption. Fine, whatever, crisis averted. Where was I? Look for the last wedge.

A word of caution here: Use a separate marker, like an ^ or a * to indicate a point of interruption. That is to say, “The last wedge is there, and I was interrupted somewhere around ^ here”.

Why? Because interruptions in the real world aren’t like software interrupts. They generally have a lead up time, that period of time where your brain is torn between doing its duty and tending to the emerging crisis. Yes, I know there’s a ruckus outside and yes, I know there is most likely going to be a football thrown through the window in a second, but if I persist I can get through this last sentence – Stop. Put the ^ marker there.

It’s a big red flag for “You may have read this, but you weren’t really concentrating. Read it again when you’ve fixed whatever needs fixing.”

Another word of warning: All the editing in the world won’t make a lot of difference if you leave your manuscript and glorious Red Pen lying around where little fingers can get at it.

Sigh. In this instance, it’s best to salvage what you can by printing out a clean copy of that page, and separating your annotations from the spider web.

And keep your Red Pen in a high place.

3 thoughts on “About that Red Pen…”