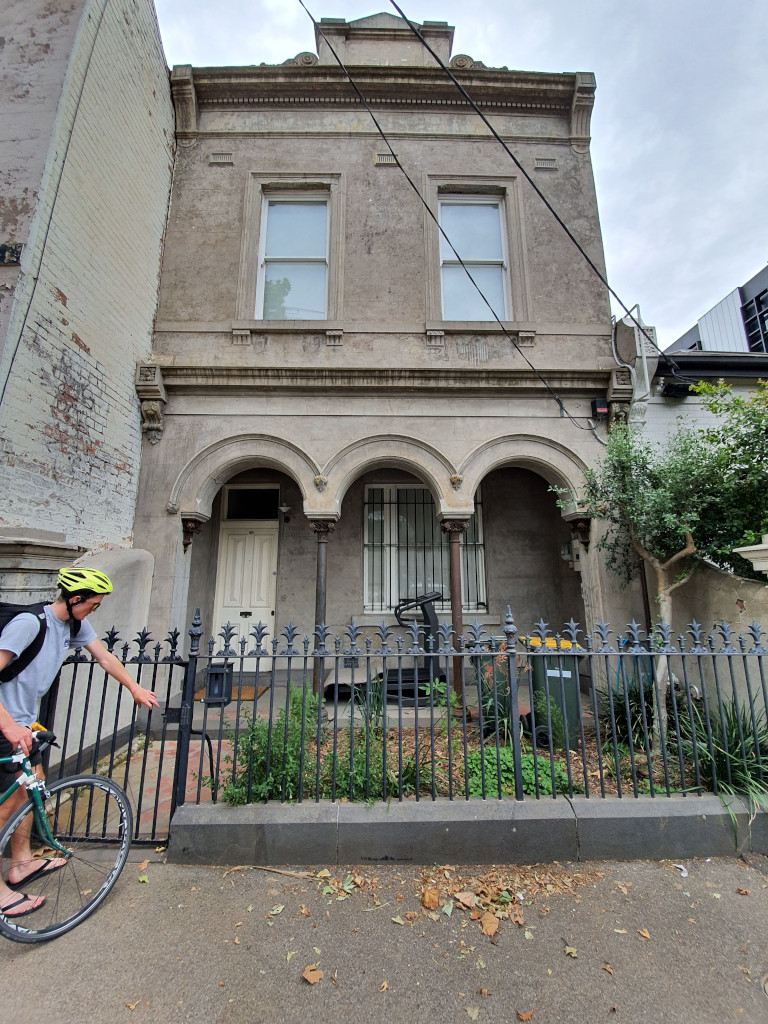 It’s getting harder and harder to find houses that fit the front covers for my stories. The latest, Cooper Alley Ghost, needed to be old, craggy, two storey and squishy. Why? Because it’s in an alley, not a street or avenue. Trolling the haunts of Moonee Ponds and Essendon, hunting about for the right one, I came up with a whole lot of not much. This one is single storey. This one is too grand. This one is way too modern. The houses in that area, you see, tend to be sitting on large blocks. There’s a nice, comfortable feel about them and those that have be squishified into apartments and the like tend to have been built only within the past decade or two. Not at all suitable.

So I gave up on that and scratched my head some and thought and thought and thought. If only I had a jet-pack, I could fly about the suburbs and rapidly cull from my list the houses and buildings that weren’t suitable, and narrow in on those that were. I don’t have a jet-pack. And even if I did, I doubt that it would be the most practical way to… and I struck upon an idea. Google Street View, of course! Why bother driving around, slowly crawling the backstreets and looking creepy, when some gigantic tech company has done that already? No, really, have you seen the cars? It’s a little creepy the way they putter up and down, and even more creepy when they go into the back-alleys of Carlton and show you the insides of people’s backyards.

Anyway, after comparing the tomato gardens of the people of Fitzroy and Carlton, I got back to my task and hunted about for a house that would fit the bill. After twenty minutes, boom, there it was – the ideal house. Two storey, slightly creepy and crumbled, squished between two other houses. A tiny front yard and a smattering of plants. Perfect. Now I just had to get there and take a photograph.

Well, it’s school holidays, and that means I’m taking care of Joey, dragging him about, taking him to the pool, to work, to boxing, to the shops. None of those places are anywhere near Carlton. Bum. OK, so we had to make a special trip. On the hottest day of the year. And we were in Port Melbourne, had to fight through the city traffic to reach the other side. That, or go on a long, sweep around. Either way would be unpleasant. The city, at that time in the morning, I reasoned, shouldn’t be so terrible. That’s a relative term. The traffic was lighter than peak-hour, granted, but that doesn’t mean it wouldn’t have been faster walking. And don’t get me started on the terrible driving. The day was getting hotter, Joey was getting crankier and my patience was getting drier. We finally popped out the other side and reached Nicholson Street.

Parking. Yay, hadn’t thought about that. I normally ride a scooter, so there’s no need to worry about parking. On Nicholson Street was not an option – all the parks were gone. So I hit up Leicester Street and poked about there. Permit parks over here, no standing over there and lots and lots of ticketed parking. Heck, all I wanted to do was jump out, take a happy snap and go home. Not happening. So then it’s around to the next street and the next and, a stroke of luck! There was a two hour spot just waiting for us next to a (much needed) water bubbler.

We got out, headed to the house (just up the road) and, wouldn’t you know it? There was roadworks signs and parked cars all over the place, with no clear shot. I tried from a few angles. No good. I stood closer and further, tried the zoom on the camera. Still no good. Joey was at boiling point. So was I. “Blow it,” I said, “Wasn’t there a 7-Eleven on the way over?” A slurpee took joey off the boil and shut him up for at least thirty seconds while I thought. I didn’t fight all that way to give up, and considering the general feel and age of the suburb, there had to be other samples about. We wandered up and down for a little while. At last! A house! Two floors, old, etc. Sure, there’s a car parked in front but it’s back far enough that with the wide angle on I should be able to…

And just at that moment, the occupant of the house comes home on his bike. No, seriously. I wasn’t doing anything illegal, of course. I was on the sidewalk, taking photographs, but you can appreciate how uncomfortable it got. So there were a few shots with said occupant in the picture, putting his bike inside. Can’t use those:

Nope. I went to the house next door, but its front was way too close to the street, so that was no good. Nope, it was this one or nothing. I stole back, distracted Joey with something shiny in an alley, flipped the phone to wide-angle and took the shot. Boomshakalaka and thar she blows, a fine specimen of an aged house… complete with treadmill out the front, plastic garbage bins and electricity.

I’ll have to do something about those.