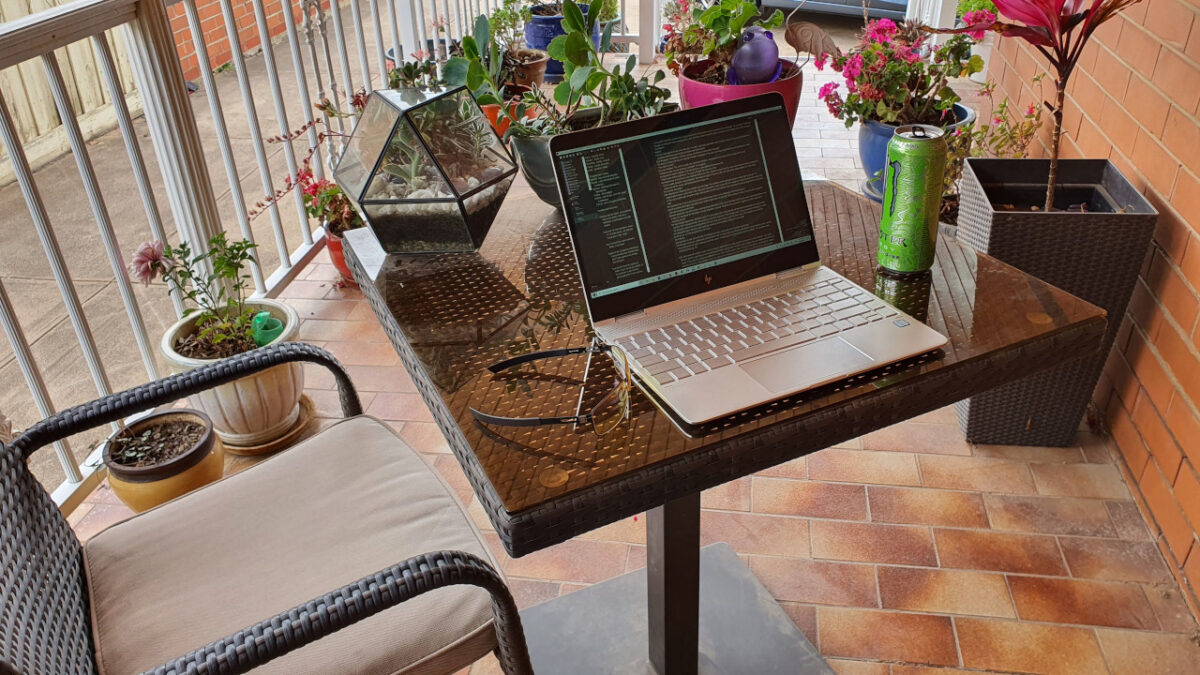 Working from home has presented its own benefits and problems.

Benefit – my commute is from my bedroom to the study.

Problem – My study is now my work area.

Back in the day, before the wu-flu, Work was Work and Home was Home. Sure, I’d be on call some weeks, but there was still a geographical distinction between the two. On the bike, ride on the road for an hour, get to the big, grey building, do the thing, talk to the people, eat the lunch, do more of the thing, ride on the road again. Home, sweet home, was waiting for me.

Now, not so much. Something has changed.

When I was first working as a freelancer, I found out that sectioning off a room by closing a door was beneficial, though inadequate. A door makes a difference, to be sure, but that was before children, and children, like pets, have a knack for opening the damn things and busting the whole illusion wide open. Next thing you know, the one bleeds into the other and your Work is your Home and your Home is your Work.

What to do? What to do? I’ve got a massive novel coming up, and I need to concentrate. I need to rid myself of the distractions, the ringing phone, the annoying refrigerator noises, the cat, the ‘oh, can you just-‘…

What to do, indeed. So there’s a table out the front, on the patio, tucked around the side:

It catches the afternoon sun. The plants attract all manner of insects. The birds come and have a drink from the water barrel a little over the way. Cars race past, kids ride on bikes, nannas walk the streets. And you know what? It’s awesome!

Sure, I have to vacuum up the cat hair before I sit down. Sure, I have to clean the dust off the surface, otherwise the laptop is crunchy underneath. Sure, I have to slap on Aeroguard and light citronella candles to prevent the mozzies from chewing my legs to a pulp, but damn, it’s a really good place to write.

Dead set, I reckon since I’ve started out there, I’m getting 2000 words in a session, easy. The other, other day it was 5k. Totally chuffed. I reckon I’ll get this Darkness from Below finished in no time.

Let that be a lesson to you. If you can’t close a door, open one, and go outside. 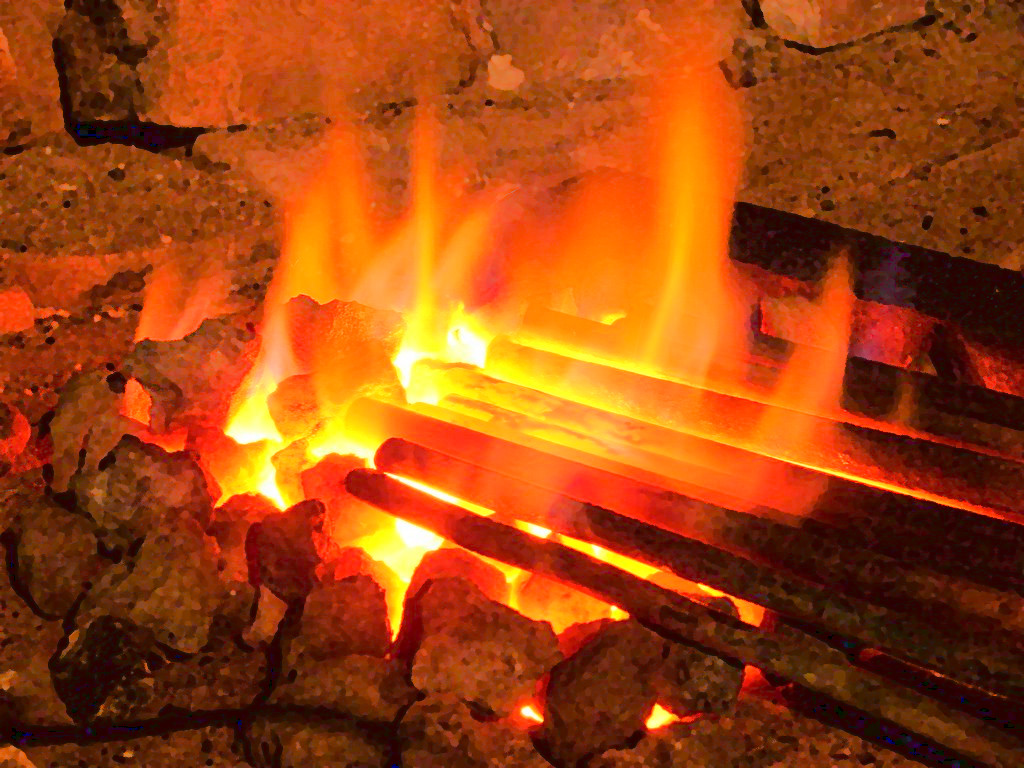 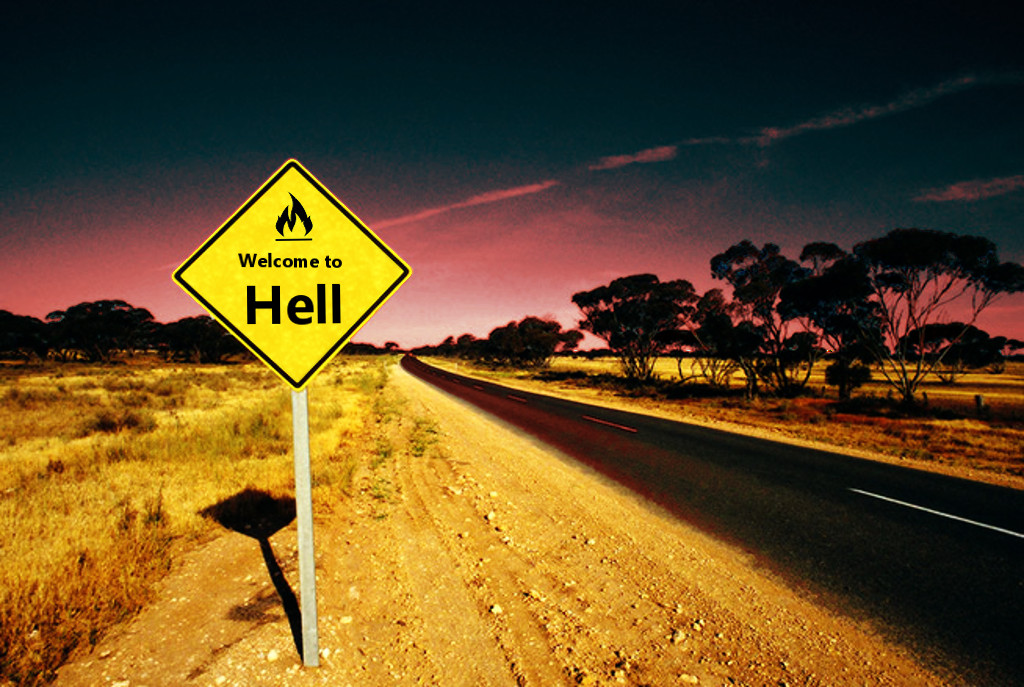 I was sick yesterday. I’m still sick today, but yesterday, man. Fever, nausea, headaches, chills, aches, the works. It was the worst. World ending, full-blown Man-flu. Took some psuedoeffingwhatsit to help with the nose and passed out on the couch with a bunch of tissues as company.

Uh, I thought this was about Hell?

It is. Bear with me. In moments of fever induced delirium, my mind rubs its neurological hands together and, unrestrained by the normal censures of common sense, it goes on a merry little romp.

I remember, once, I watched an obscure tea-party on the back of my eyelids. Another time I thought up a ridiculous rendition of ‘Lasciatami Cantare’. Upon another instance I truly believed I had fallen off my bike and had lost my leg. I was astounded, not to mention utterly relieved, when I woke and found it attached.

Most of the time, not that this happens very often, but often enough to notice a general trend, you see, my brain decides that it’s time to do some spring cleaning. It sorts through all the shreds of memories and sniffs at each one, holding it up to the light, peering closely at it.

Still not seeing the correlation, Jez…

Getting to it. The thing is, this time around, after the usual regrets of uncontrollable failures, it hit upon an old story I had written back in high school. Penfold and Diana, it was called. Probably only about five thousand words, it was a decent story that I had, way back then, thought could do with a bit of love and sprucing and, perhaps, one fine day, publishing.

As usual, my brain lamented that it was stored on a floppy disk somewhere (remember those, kiddies?) and so was most likely lost to the ether. It moved along, following the thread, picking up all the stories that I had written and discarded, intentionally or otherwise.

There was the story about the man who tried to kill his shadow, the story of the adolescent who found love too early, the story of beast within the walls, the girl who lived with her insufferable torment of ‘Holkum Fire’.  And, of course, Darkness from Below, the unprintable novel. Each time my brain picked one up, I had a pang of guilt – was it guilt? – maybe regret, I don’t know, and each time I resolved to re-write the story.

Are you sure you don’t still have a fever?

Maybe. That’s not important. What is important is that, while there are some things that I cannot control, some failures that are too far gone to repair, these stories don’t belong in that category. They can see the light of day. I could trawl through my old hard drives and poke about for those forgotten gems, or just write them again from scratch.

And here comes the part about Hell: If I follow up on my good intentions to give these little guys some love, it will be at the peril of what I’m doing now.

It is not about whether I will resurrect these stories: Easy. I’m going to. No-brainer. Next.

It’s that I cannot drop what I’m doing now – working on the sixth part of Adaptation as well as getting some images in order for a Grosvenor Lane Ghost animation – and get cracking on these little guys. On top of this, I need to maintain this website, perform some administration on the domain and such, not to mention the everyday chores of watching after a little (and increasingly crafty) boy.

If I were to attempt to get everything done, I would not succeed in getting anything done. Men don’t multi-task at the best of times. I need to focus on one thing and only one thing.

In Software Engineering, context-switching is a very real way to burn an engineer into the ground: Swapping between various, unrelated tasks is a helluvalot slower and more error prone than doing one task at a time. The intention is good – to get everything done to make everyone happy – whereas the end result is getting nothing done and making everyone angry.

By the same token, having ten tasks 10% done is equivalent to having nothing deliverable, whereas having one task 100% done, and nine not started means I actually have one thing deliverable (and only nine things left to worry about!).

My good intentions to ‘Get it all done’ are indeed paving the road to Hell. Similar to my previous post, When Too Much is Too Much, aiming for everything will result in hitting nothing.

It’s at times like this that I put the ideas pad down and pick up a whiteboard marker.

Now, if you’ll excuse me, I have to cool my jets and prioritise.