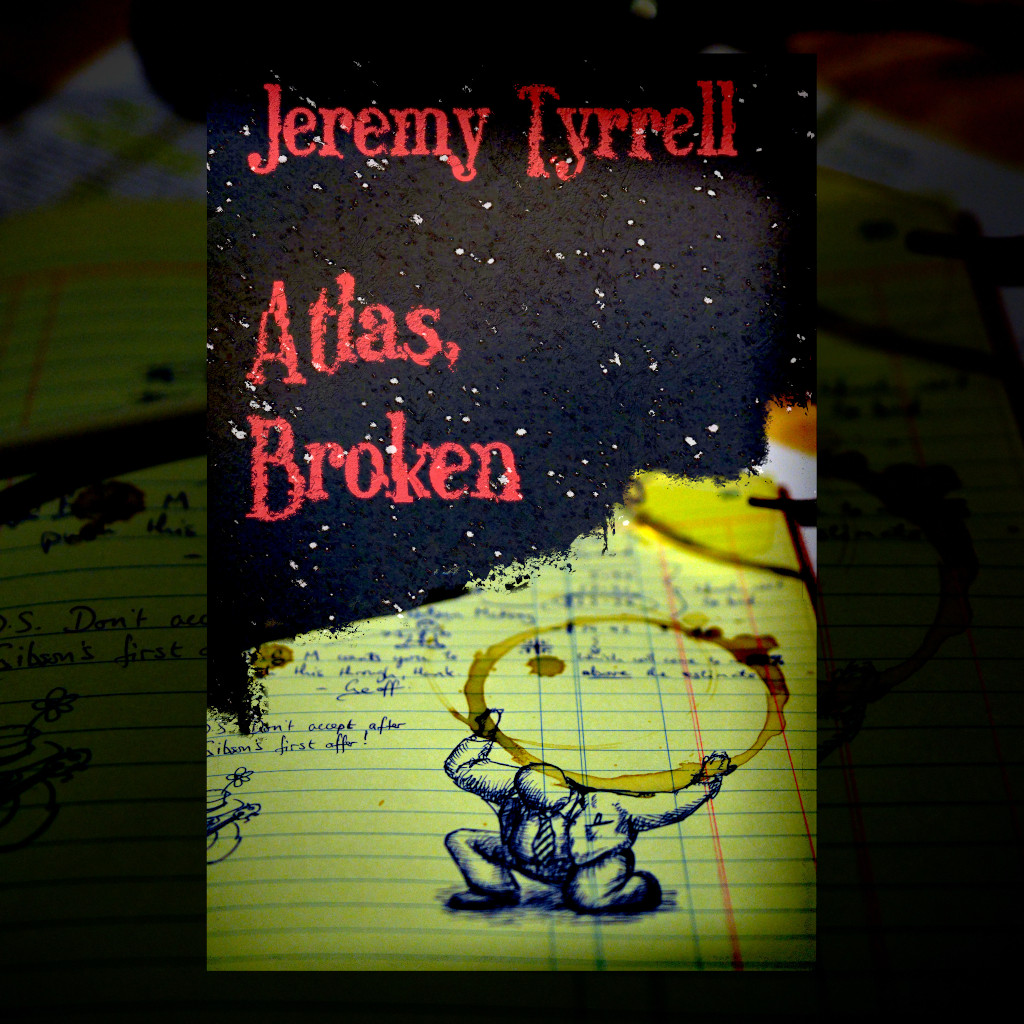 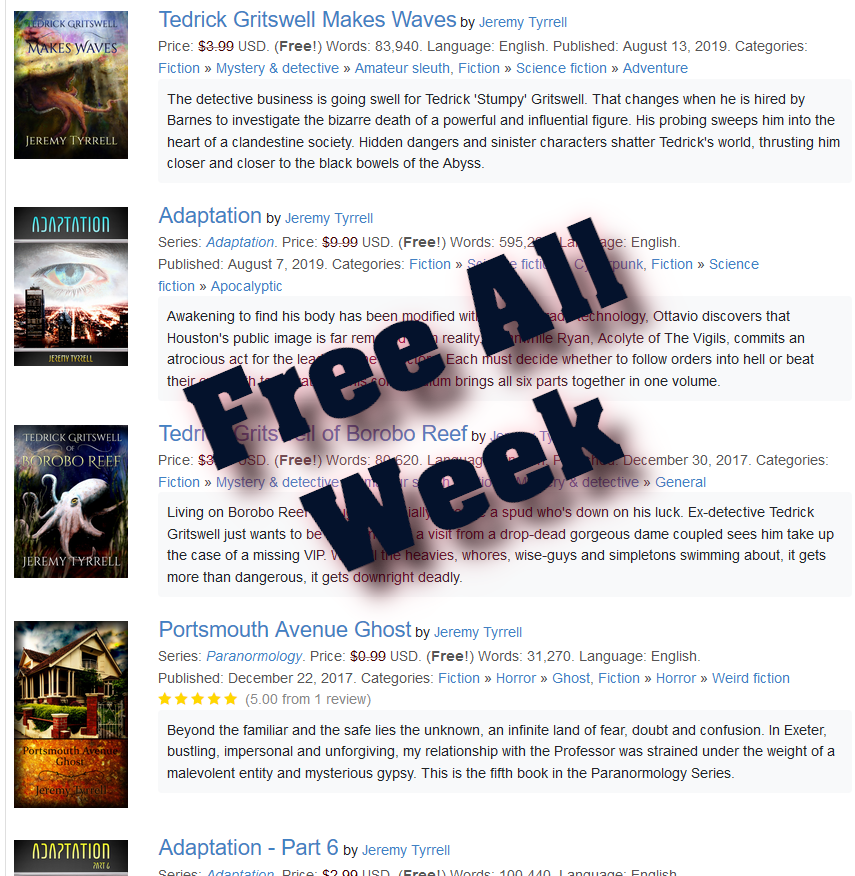 Is it Wear your Best to Work week? I’m all for that kind of thing. I mean, we live in a fantastic age where we have incredible choice for what to wear, so why not bust that suit out and wear it with pride? But no, no, it’s not that week.

Is it Stay in Bed week? Unfortunately no. While I would welcome the change of pace, I’m sure the economy wouldn’t enjoy workers dropping tools, wheels, keyboards and pens to take a kip.

Is it Put your Phone Away Week? I wish, I wish, I wish it was. You know how much fun it is when you can talk to someone without a black rectangle covering their face?

You’ll find all of my books for… free. That’s right, gratis. Go nuts. Get the entire set of Adaptation (Just get the compendium, it’s easier). Go on. What’s that? You want an octopus detective? OK, go get Tedrick Gritswell of Borobo Reef and, while you’re there, get Tedrick Gritswell Makes Waves.

Not your thing? Grab Atlas, Broken or the Bullet. Or if you’re into Paranormology, grab all five books and shove them in your cart. Electrons come free, baby, so go nuts.

If reading really ain’t your thing, might I suggest you listen to the audiobook versions? It’s kinda sorta still almost and E-book, right? It still counts. It’s just that you’re reading with your ears. Yeah. Let’s run with that.

What are you still doing here? Go and read a book!

Read an E-Book week goes until March 7, so get in while you can. 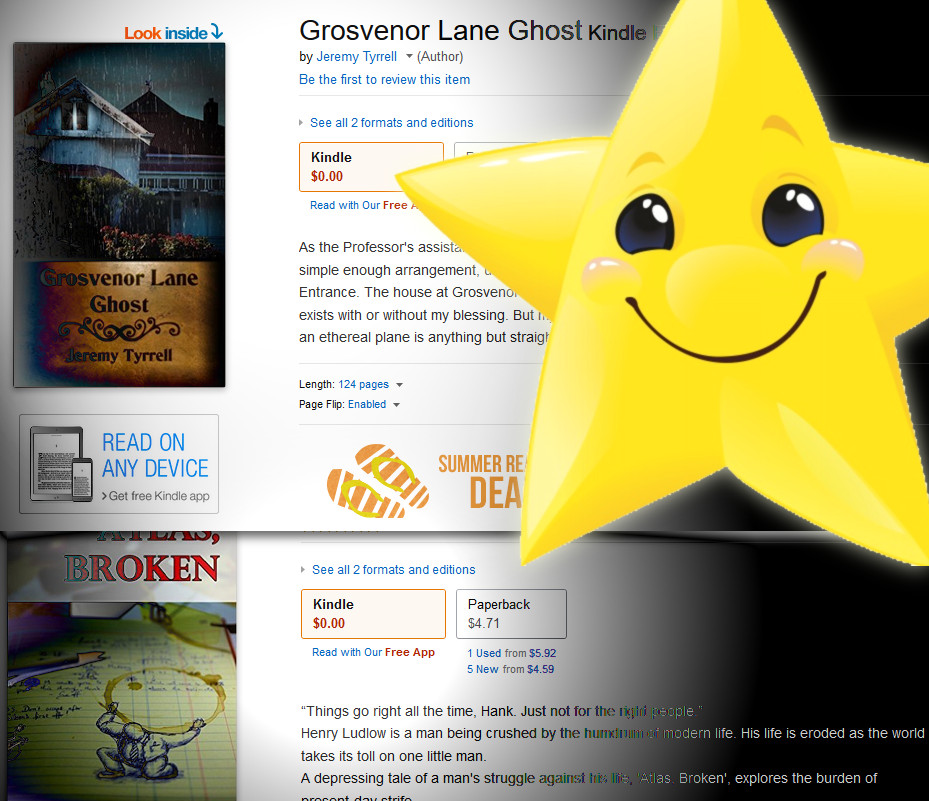 My sincerest thanks to everyone out there who hit up Amazon and made a play to make Grosvenor Lane Ghost Free for Kindle because – drumroll (as if the title of this post wasn’t a give away) – continue the drumroll to add tension and Boom!

You did it for Atlas, Broken (and that was awesome) and now you did it again!

You don’t know what this means. Oh, I’m gushing. I haven’t written a speech. It’s all so overwhelming… um, I’d like to thank the Academy…

No, really, thank you guys for all your efforts and, hey, if you haven’t picked up your copy, why not head over there now? While you’re there, I don’t suppose you could make Jolimont Street Ghost free as well? 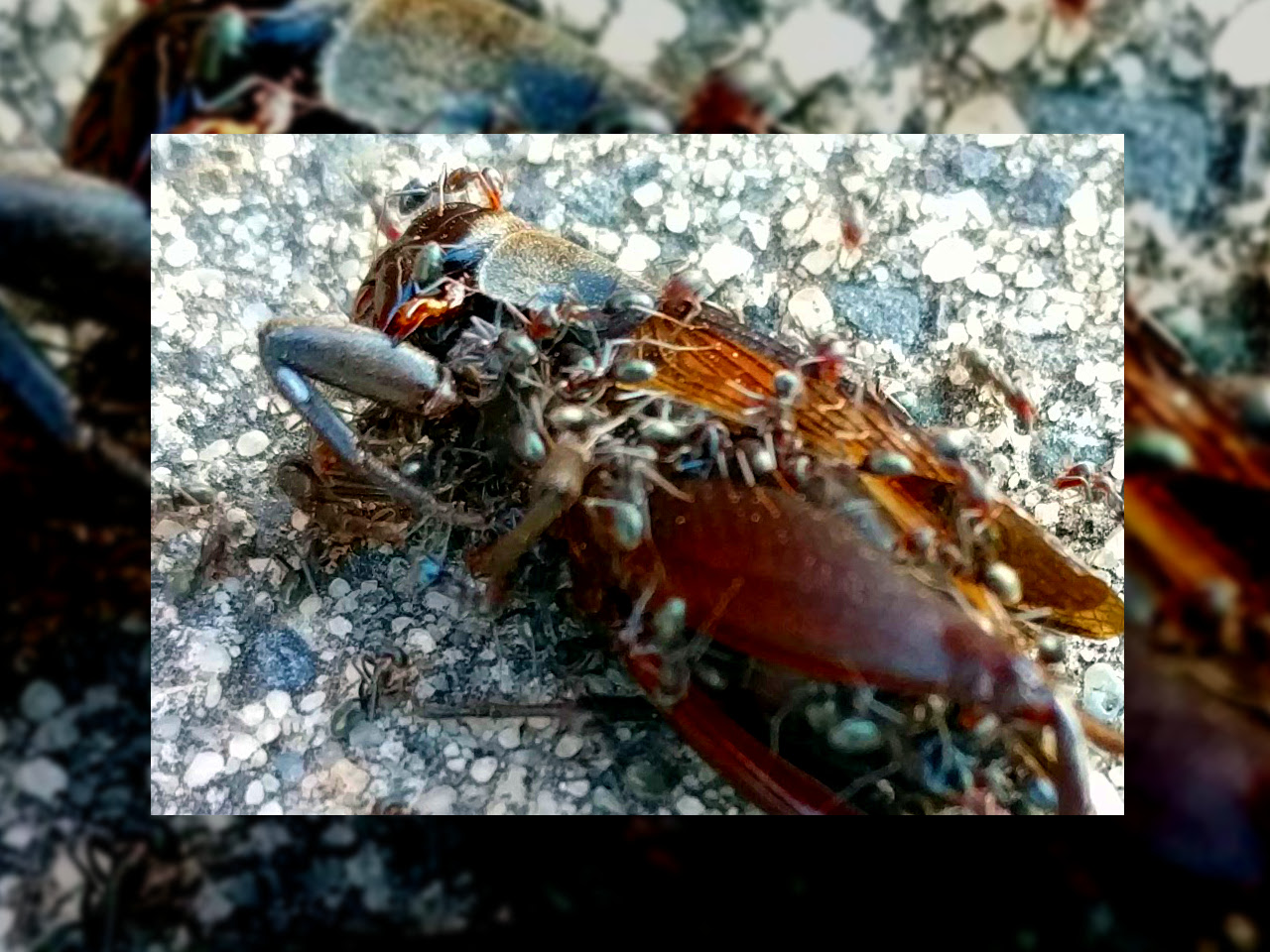 In Atlas, Broken, Henry comes across a cricket in his backyard, chirruping merrily at the moon.

The next day, he finds it savagely gutted by ants.

I’m not an expert when it comes to the life-cycle of crickets. Where I live, they come out every Spring, all shiny and black, and chirp like mad throughout Summer.

During Summer you can look in the cracks in the clay soil and find them poking their glossy, black heads out, twitching their antennae, leaping and scurrying away with a purpose. Chirp! Chirp! Their song is full of energy and promise. It’s a chorus of hope, a medley without a beginning and without an end, just one, constant beat. Chirp! Chirp!

And then, as autumn sets in, you hear their tune change. They sing their sorrowful song, their lives are nearly spent. Crrr… Crrr… The grass hides little black bodies, shuffling around aimlessly, hiding when one approaches, silencing their song temporarily until they feel safe once again. Crrr. Crrr.

The cold creeps in. More and more one finds the shells of crickets crumpled on the ground. A mess of brown and black limbs, they have been trodden on, or they simply gave up scurrying. The ants are ruthless, cutting them to bits, dragging all of the smaller pieces back to their nests, leaving the chunky husk to be blown about or crushed underfoot.

After a couple of days there’s nothing left as a reminder. No marking stone, no stain, nothing. The rain has washed away anything the wind has left behind. It might as well be that the cricket never existed at all.

If we look at Henry in the light of the Cricket, is there any wonder that he has such empathy for his little companion? 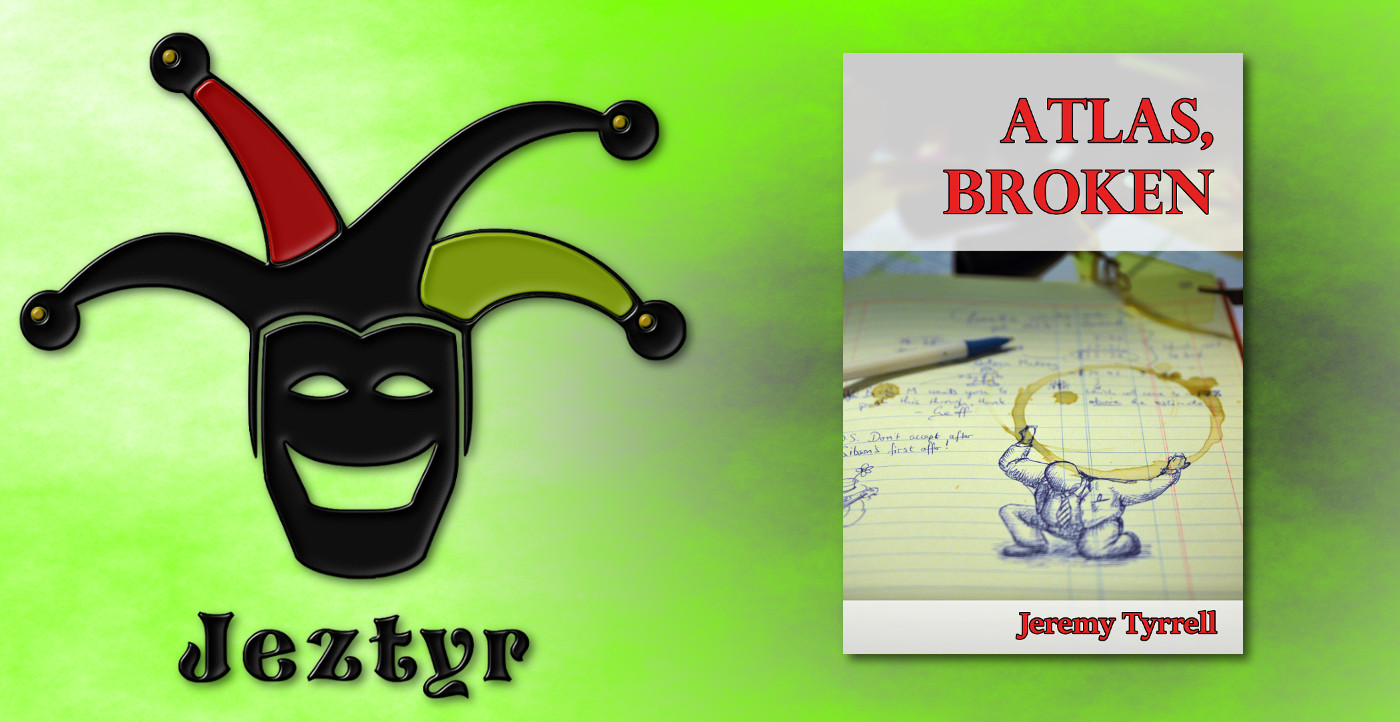 I’ll have to interrupt the whole egg blowing business for a quick revert to writing and, more specifically, promotional advertising. Yes, if you’re an independent writer, heck, independent artist, you’re going it alone in everything, and that includes telling the world what you’ve got.

Everyone says, “Facebook is the key” and that’s fine and fair enough if you want to tell your friends (and if you have an account), but what about those you don’t know. You know, your actual audience?

In short, in order to spread the word, you need to be able to catch the eye or the ear of your future readers. Short of standing in the middle of the city handing out free copies or shouting from a megaphone, there are other established avenues you can choose.

That got me thinking: It’s one thing to have a book review, it’s another to have someone read it out for others to hear.

So, poking around, I found Radio Rock, 92.6 The Blitz, that supports indie musicians, writers and artists in general:

I listened and realised that the reason I turned off the radio at home was because it’s all mainstream, heard-it-before stuff. Nothing inspired, all glitz and glam and boring. Not with the Blitz. Bam! First song I heard, I thought, “Hey, this is kind of cool…”

Turns out it’s really good to code to, as well.

So where better to test out a promotion than with a station that actively promotes indies?

Hence, a big thank you to Tom Slick and the crew at The Blitz for the opportunity. Needless to say, I’m well chuffed with the result! Head on over and support independent artists from around the world.

If you want, have a listen to the Tuesday, 28th October show. The spiel for Atlas, Broken is at around about an hour into the show, or you can listen at YouTube:

All you indie authors out there, get on your megaphone.

In year nine I wrote a poem. It was chock full of symbolism and meaning. I thought it was pretty straight-forward, the rest of the class, teacher included, stood dumbfounded.

“What was that about? Was that a collection of random words?”

“Well, er, don’t you see? Marching across the clock-face and the bit about the hooked cross and, um, the star twice-threed and… um…”

He crossed his arms and shook his head, “I don’t get it.”

And there they are, those four (and a half) damned little words that strike fear into the heart of the author.

Your artistic integrity demands that you tell a story (or write a poem) the way it is supposed to be written, warts and all. The population in general demands that you keep things palatable and digestible.

I’ve tried to take the high road when writing my books. Rather than beating the audience over the head with the meaning behind the book, I’ve opted to respect that their mind is more than capable of making its own decision. Noble attitude, right?

Well it still sucks when you get told, point blank, “I don’t get it.”

Case in point, The Bullet:

And it goes on. Each time I bite my lip and do my best to explain that the story isn’t a war-story, nor is it an historical account, nor do I want to labour the meaning behind it. It’s metaphysical. It’s abstract. The story is what it is, and it becomes what you, the audience, makes of it.

Then there’s the flip-side of the coin. After the looseness of The Bullet, I tightened up the underlying metaphor. Alas, with Atlas, Broken – everyone else seems to get it wrong:

And I bite my lip and try to explain that it’s a book about depression, and that I could have entitled it “Henry, Depressed” but that would be akin to taking out the Mighty Metaphor Mallet and smacking the reader over the head.

What can I do?

And if that’s true for you as a member of the audience, it’s true for all members of your audience. Not only that, if your reader sees something else in your book that you didn’t intend, great, that works too.

The thing about The Bullet is that it’s so open ended, that the audience is bound to make its own interpretation, and I have to be able to accept that. And Atlas, Broken is really only going to resonate with those who have experienced depression. To everyone else, it’s a gross-out zombie book.

So what can one do? Sure enough, there isn’t a silver bullet, although I’m tempted to say the following: “Write for your audience.”

If your target audience doesn’t get it, then you’ve failed. If they do, you’ve succeeded! If the wider population doesn’t get it, too bad. You didn’t write it for them, after all. That’s not to say that you can write any old tosh and claim that “It just hasn’t found the right reader yet.”

What it does mean is that, when you put your final story out there, and strange questions and ideas come flooding back, it’s not the end of the world. Feedback is feedback and, heck, at least people are reading your stuff and, what’s more, they’re thinking it over. That can only be a good thing.

As for the poem, no, I don’t have it handy. It’s landfill.