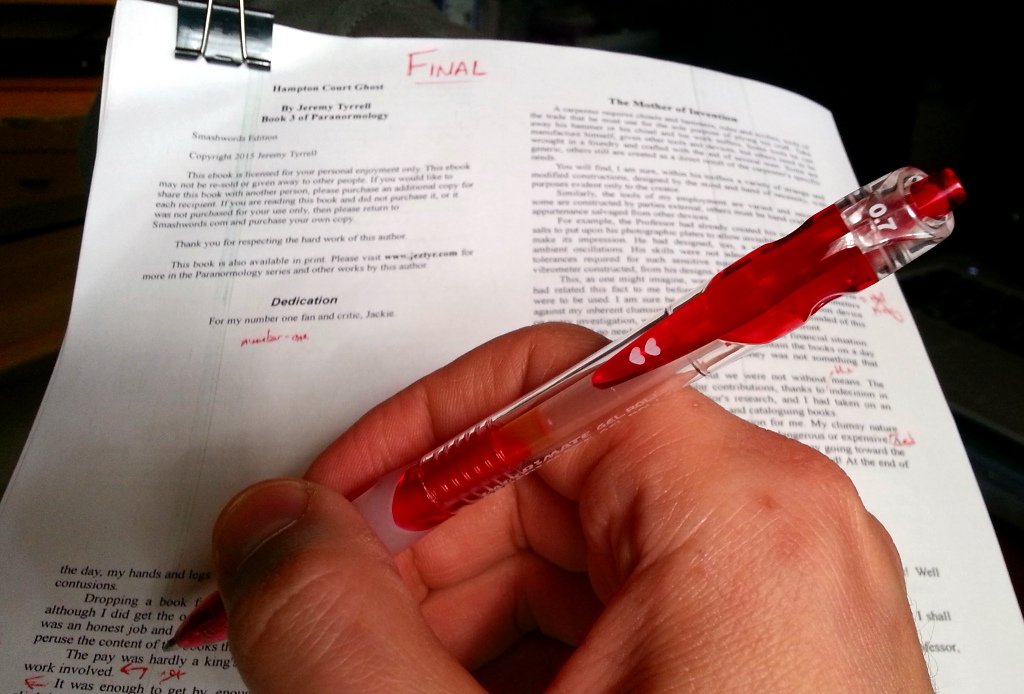 Back at school, when the teacher took out the red pen, you knew exactly what was coming. Underlines, circles, cross-outs, comments and the occasional tick. All in aid of making your work better.

Now that you’re an author, you’re going to have to do this yourself unless, of course, you have the luxury of getting someone else to do it for you (in which case get them to read these). For the rest of us, it’s a groan-worthy task, but a necessary one nonetheless. Why? Because whether you like it or not, your draft is full of holes.

You’ve done your manuscript electronically. You typed it up on a word processor, you ran the spell checker, you hit the save button a billion times, it’s all digital. So why on Earth would I encourage you to fall back to pen and paper?

Because it allows you to focus. No computer or tablet or phone or laptop means no distractions. Maybe just five minutes of cats playing the piano? Not with paper.

And even if you’re the disciplined type (kudos) there’s an even bigger reason: You’re not obliged to make corrections there and then. This is so important I’m going to paraphrase and put the words in italics: when correcting your work, your job is to spot the mistakes and suggest corrections, not actually make the corrections.

Go back to the teacher example: when correcting, they indicate issues, suggest solutions, offer other words or phrases, but they do not push you out of the way and start typing for you. Their job, at the point of correction, is to indicate to you that something is wrong. It’s then up to you to go back, with the bundle of corrections in hand, and fix up what needs fixing up.

Nothing should get in the way of your corrections. If you print out your manuscript, you can take it with you, or even a couple of pages at a time if you don’t have capacity, so that while you’re waiting for the bus or sitting down for lunch, you can whip out that red pen and play the role of teacher.

If you think it’s a waste of paper printing out your 400 page tome, think again. A lot of books these days are electronic. Every eBook sold is another bundle of pulp that doesn’t need to be bleached, dried and printed. And by ensuring your book is up to scratch, you reduce the number of editions it might suffer through.

At all costs, avoid the temptation to fix up errors there and then. Don’t be worried, your book is still a draft, right? It hasn’t seen the light of day. It’s pliable. Just be patient and do your corrections.

“But,” you say, “I’ve got a bril idea that I’ve just got to get down before it escapes.”

Good, that’s a very good thing, and we’ll deal with that in a second. Bear with me.

Recently I’ve been using SCRUM for software development and, as Scrum Master (yes, it’s a thing. Look it up if you don’t believe me. Go on.), one of my duties is to ensure that the developers have no impediments to perform their duties.

Not to imply that Developers are apt to call any little stumbling block an impediment, far from it, Developers work best when everything is running smoothly. Any interruption, be it from software, or from other developers or stakeholders, or from improperly written specifications, breaks the ‘Zone’ effect and slows the whole process down.

So, too, with correcting: Sure, you can correct with a scrappy printout, a scratchy pen and a noisy bunch of kids running around your legs. No, really, you can. I’ve done it. The thing is, I didn’t do it very well. The trick is to give yourself the best chance to get into the zone, to put on the teacher’s hat, to be your worst critic.

# Firstly, buy a good red pen. Don’t get that old, dry, chewed, hair covered, broken stick out of the bottom of the drawer. Go to Officejerks and splash out on something good, treat yourself. .5mm to .7mm tip, nice and wide, but not too wide. I prefer a ball-point for writing, but felt-tips are nice too if they aren’t old, dry or flattened. Goopy ink is a no-no, since it has a tendency to drag across the page, or get smudged by your hand. Smooth, bright – almost fluorescent – ink is best.

You want any correction to stand out on the page from three feet back.

# Highlighters aren’t a bad option, but there are two things, from experience, that prevent me from using them. Firstly, when I’m sitting in front of my machine, after making the corrections, I wear my Gunnar glasses which have a distinct yellow tint. Yellow highlights don’t show up as well and I found that I missed some corrections, although blue is pretty good.

Secondly, if I’m correcting, making a quick dab with a highlighter to spot a spelling mistake is great, but if there’s anything further required, such as scribbling a note or putting a comma in, then I have to change to the red pen, which breaks my flow. And writing notes in a highlighter doesn’t work.

Still, a two pronged approach of highlighters for spelling and punctuation and red pen for notes, alternate words and markers is a sound option if you don’t mind swapping out your tools as you go.

# Clamp your paper with a bulldog clip. Staples don’t cut the mustard when you’ve got a thick wad of papers. With a good clip, you can also remove pages so you can bring only a chapter at a time to work.

# Print your work out on nice, tactile paper with a good printer. Laser printers work best, I find, since the pen writes nicely over the carbon, and drops of coffee don’t smear the text. I prefer a serif font, one with the little dangly bits on the end of the characters, since I find it easier to read, but that’s just a preference.

# I don’t go for double-spacing. I tried it and found it very distracting. 1.5 spacing was OK, since it separates each sentence out, but for the last few, I’ve reverted to single spacing. It’s just easier for me to read. And that’s, once again, the message I’m throwing at you here: remove all impediments that you can, make it comfortable to correct, and it won’t be such a chore nor will the quality of the correction suffer.

As for what and how to correct, I’m going to put that into a coming post, since this one has gone on for long enough.