After doing all the setup and tweaking and uploading and tweaking again, I got to the point where I could actually submit the book for publishing.

As I’ve already explained, while CreateSpace does allow Author copies, Amazon does not. No big deal, let’s just order the damn book already and make sure it looks as it should.

Postage to Australia is a bit on the hefty side so I ordered a couple of copies, clicked on the PayPal button, forked over the cash and sat back.

Not that long, it turns out. The estimate was about three to four weeks, but the book arrived in two. I’m guessing they err on the side of caution, and it’s a bit of a bonus when you get that big, fat package in the mail and you know what it is, even though it’s early. Oh, the excitement!

So how did it go? Did it work out? See for yourself: 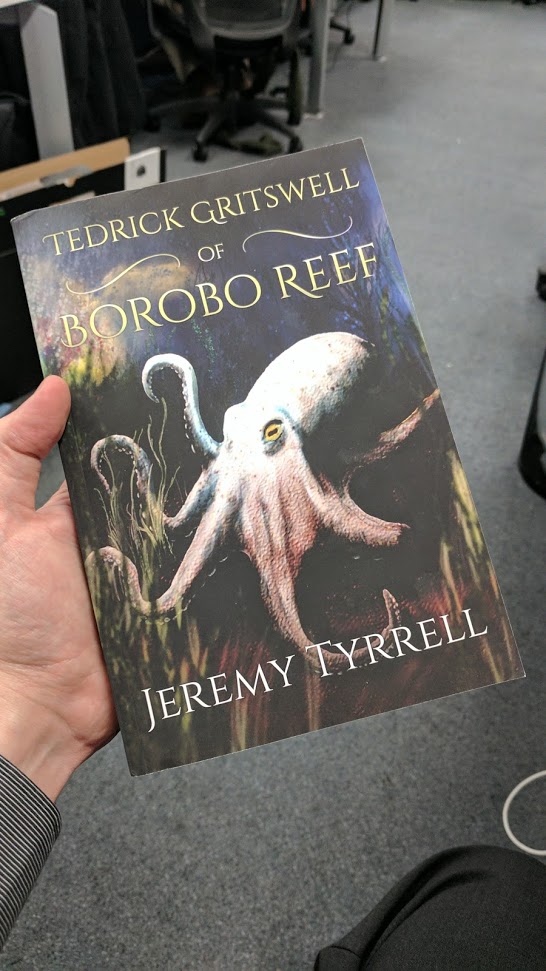 Ta-da! Not bad, not bad. I quite like the matte texture of the cover. That’s a nice option. I’m used to a glossy one, but I think the feel comes out alright although the darks are very dark indeed. It’s always the way – how things appear on the screen is not a true indication of how they’ll come out when printed, and that’s true of every book I’ve printed.

You can see this more clearly on the rear, where there’s a lot of dark: 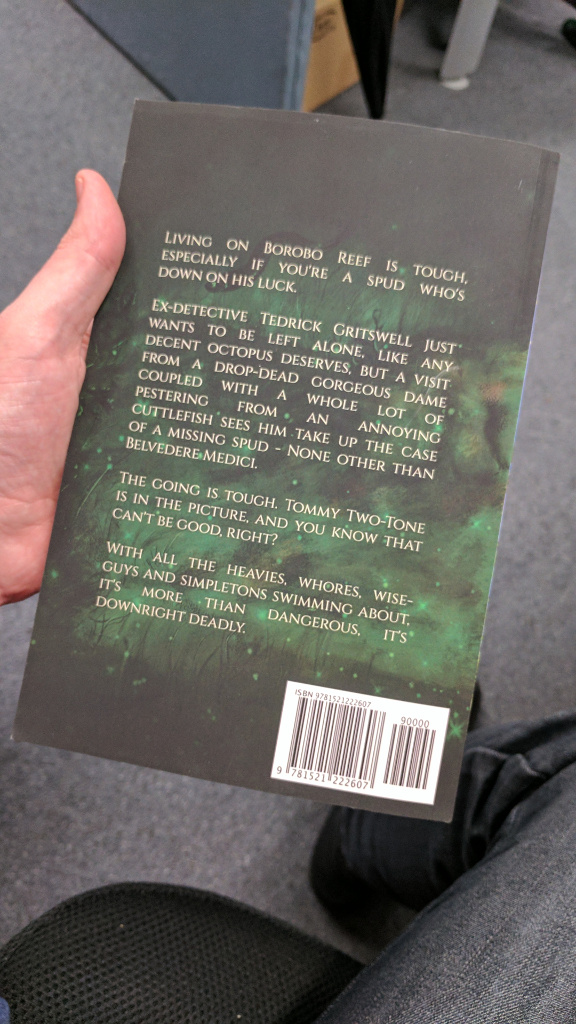 And the positioning of the ISBN comes out trumps as well. Chuffed with that. The spine looks like this: 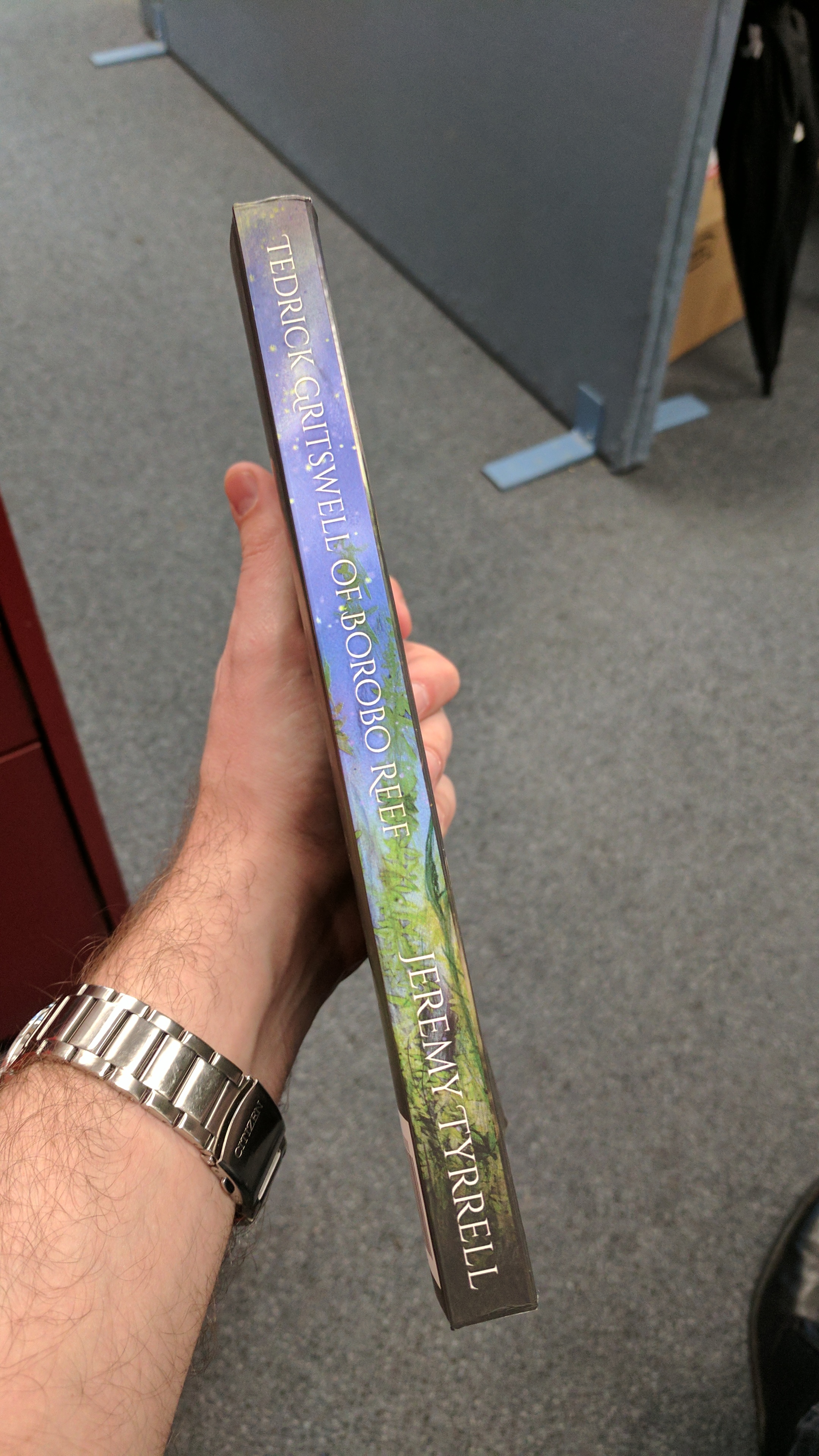 It doesn’t come up too clearly in the shot, but the front bleeds about a millimeter or two onto the spine. Nothing drastic, but it does demonstrate that you cannot have absolutes in your printing – always assume that the cover might shift a little this way or that, and don’t stick anything sensitive onto the edges. 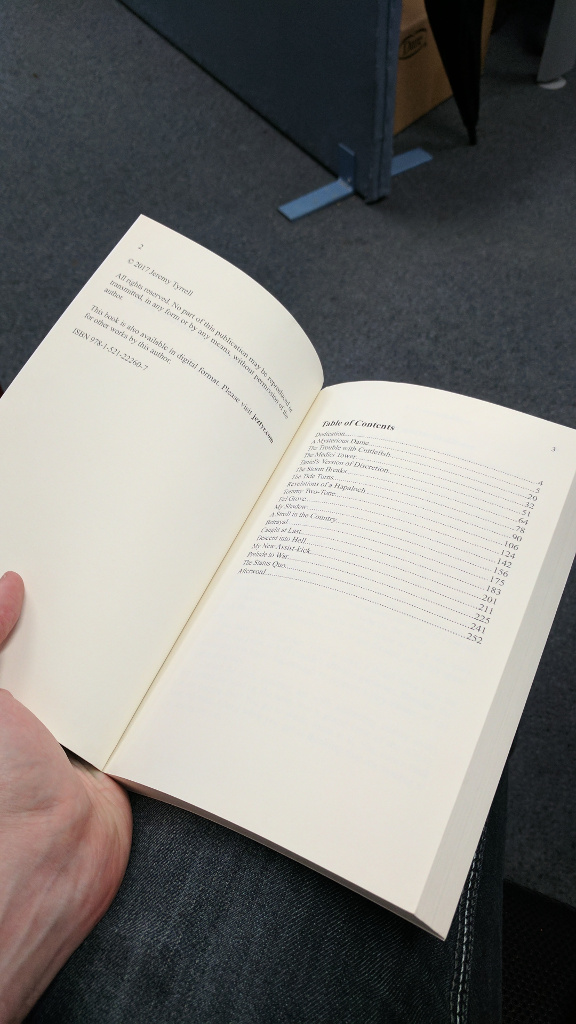 Yup, that’s cool. I like the choice of cream over blanch white, it feels better and the print isn’t so hard on the eyeballs. I’m glad I fiddled with the margins so much. You can see that the distance fro the spine to the text is comfortable, not squished into the binding, and the distance from the outer to the edge is also comfortable.

The ISBN and front matter is all good. I don’t mind the table of contents, that’s fine. There is an extra page or two at the back (not shown here) with “Made in the USA, San Bernadino, CA.” Which is interesting. I think Lulu out-sources its printing to be closer to the point of delivery, whereas – guessing here and please correct me if I’m wrong – Amazon would have its own presses.

In future, I might consider putting page numbers at the bottom, leaving the chapter heading at the top. We’ll see.

So that’s that! The process is similar in many ways to how Lulu does things, with certain differences involved, mostly around the uploading and proofing side of things. KDP is not heavily restrictive in the way it does things and there are some smarts that help you out along the way.

If you’ve got any questions, just drop me a line.