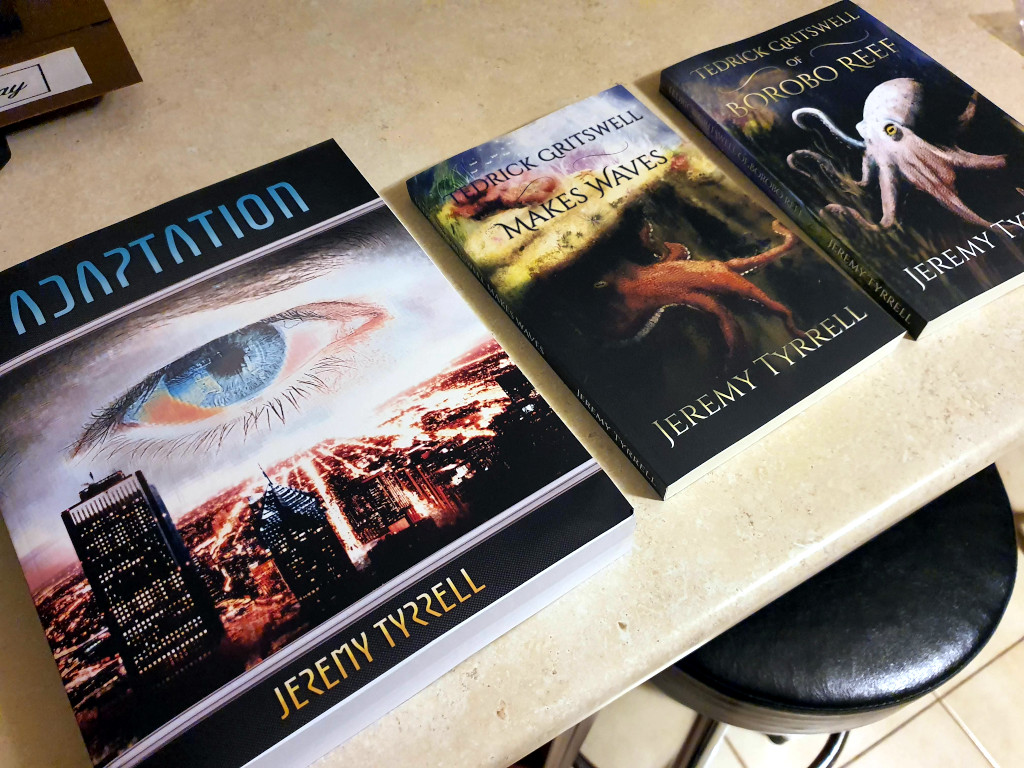 A quick update on the whole ‘getting things from Amazon US into Australia because I can’t buy my own book to check if it’s actually properly configured’ thing.

I don’t remember just how much of the story I’ve gotten through, but from my hazy memory, the last point I was at was somewhere around making the purchase.

As a recap, KDP allows the author to purchase ‘author copies’ of their books – they aren’t for resale, but you can purchase them to make sure the end product is as you’d like. That’s kind of cool because, unlike Lulu, KDP doesn’t force you to buy it at retail. Instead it offers the author copy at cost price, which is an incentive to do the last, final check.

Anyways, I had issues where I couldn’t get the items from Amazon Australia because of something to do with the GST, so I purchased from Amazon US, and had the items shipped to MyUS, which is a US forwarding service based in Florida with all dem gators (And a I wish you all the best, Florida, for the impending storm!).

Well I waited. And waited. Then I got an email a few days later from Amazon saying that my payment was declined. Strange, but it’s not the first time. I tried a different card and waited and waited, then got another email saying the payment was declined. Weird. What’s going on? So I tried using PayPal but, nope, PayPal and Amazon don’t like each other, what with the whole online market rivalry thing between eBay and Amazon.

I also got another email from Amazon warning me that if I didn’t finalise the order, it would be dismissed from my cart and I’d have to start it all again. Bum.

SO I added another card and crossed my toes and fingers and nostrils (very tough job, that) and waited, and presto! It worked! My stuff was despatched. Alrighty, now that should be it, right?

Nup. The package eventually arrived at MyUS, and I got an email, but when I went to look for it, it wasn’t there. I had a number, it had tracking, but it wasn’t coming up in the list. More than this, the automatic payment (from PayPal) was apparently declined. Say what? Yup, once again, payment was declined. What was the payment, anyway? SOMEWHERE IN THE ORDER OF $100!

Are you serious? Really? How can it cost $100 to send 4kg from the US to AUS? Mumble, bloody grumble. Seriously, ok, fine, I’ve dipped my toes in the water, I may as well jump in and get eaten by the sharks. I tried again with PayPal, no dice. I tried once more, using a different card, still nothing.

I used their chat widget and spoke to some guy, ready to just say ‘keep the damn package, this is all just too hard.’ Well, I must save Ivan, the service guy, helped me out there, and he tried to do the payment and, again, no deal, because apparently PayPal had already sent the payment. Say what? Yup. Paypal had already made the payment.

So he escalated it to the developers or something and told me to wait a day. Tick-tock, tick-tock. Another day, another email, and it looks like payment has been taken, and MyUS has shipped on the order. Wait. Waiiiit. They’ve taken the payment twice. So now I’m nearly $200 in the hole and sick of the whole thing.

In the end, it took a week to get the payment refunded, about a day before the goods actually arrived. They arrived? Yes, yes they did. After an exhausting excursion into the world of logistics, I’m now a bit wiser and my wallet is a lot lighter.

I don’t think I’ll be doing that again.