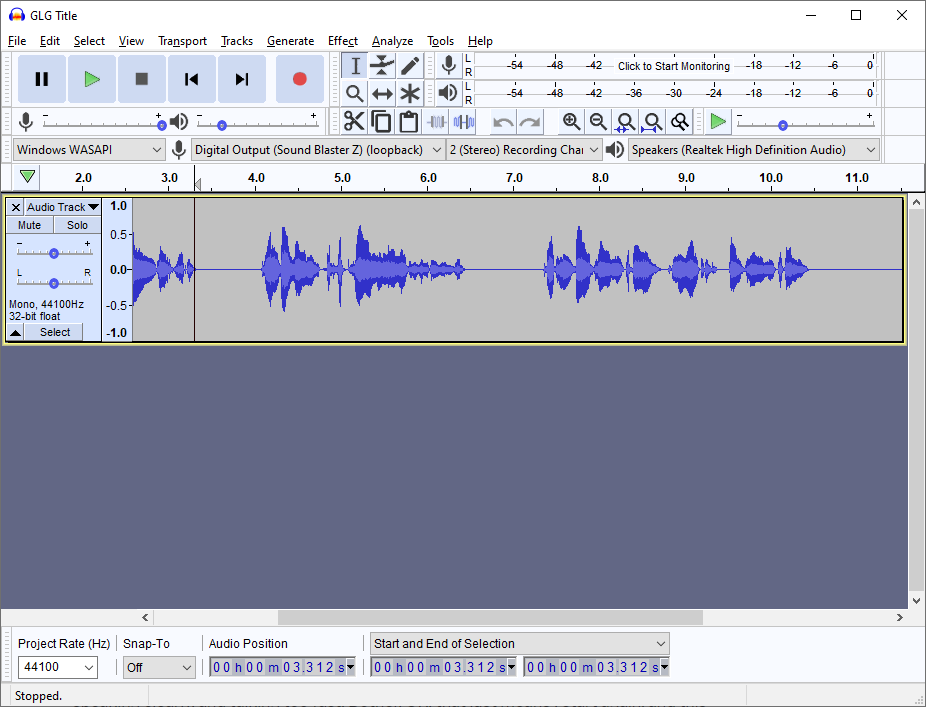 I’ve been in the booth, doing my audiobook recording, and I’ve learnt so much already. It can all be summarised in two words, “Slow Down”. Just take some time and slow right down.

I was keen to get started, to just hammer this thing out and get going. Yeah, well that may work for writer’s block or when I’ve got a story in my head and I know what all the bits are. That’s typing. Typing doesn’t care about speed. If I make a mistake while typing, great, I’ll go back and correct it and move on. That’s not possible when it comes to recording audio.

In the booth, milliseconds count. I can’t stop and have a scratch midway through a sentence. Once I start speaking, I must continue until it’s time to stop. If my mouth is gummy and I choke and cough and mutter profanities, all of that is recorded. To cope, I’ve developed a mechanism and it involves, you guessed it, slowing down.

But first, a horror story: I gave the story my full attention. I put aside the day to do the recording of all the chapters (surely, it won’t take all day!) and locked myself in the booth. After chapter 3, my mouth was dry. OK, lunch, water, have a rest, get back to it. Maybe I’ll have a listen to see how it’s sounding. Hmm, no good. I’m mumbling and not speaking clearly, and talking too fast. Bother. OK, that just means I start again, and this time pay attention to how I sound as I’m talking (the headphones come in real handy at this point).

I’m guilty, you see, of mumbling, of speaking (way) too fast, of dropping consonants and flattening vowels. Thing is, I’m not conscious that I do it, not until you play a video with me talking. I’ve been told many times, by many people, in many ways, “Jez, slow down.”

Start again. No probs, got three chapters done again by Joey o’clock, went to pick him up, came home and had a listen. Still no good. I’m still talking too fast and not clearly. Fine, I get it. Slow the heck down.

I worked into the night, persisting, cracking through the first couple of chapters (again). The next morning I came at it, ready to go, ready to speak clearly and slowly. I started early and got used to listening to myself as I spoke, correcting mistakes as I went, keeping a pace. By the afternoon, I had all chapters done. Perfect. Late lunch, but who cares? I clicked on the play button and died. Ba-bow. Bad news, Jez. The little microphone drop down in Audacity hadn’t been set to the studio mic, rather the internal computer mic.

I had been recording my voice, muffled and indistinct, from within the booth while the microphone on the laptop was outside the booth. There was nothing for it.

If I had slowed down, taken the time to check the settings before and replay the clip after each chapter, I would have spotted it in the first hour and only lost a portion of my day. As it was, I was in a royally gloomy funk for the rest of the evening. I had lost a day’s worth of work, had a sore voice, a massive headache and nothing to show for it.

All this means I’ve gotten into a process when it comes to recording – turn on my computer outside the booth, plug in the mic, load up Audacity, make sure it’s on the right bloody microphone, sit down, lock the booth, get thirty seconds of silence and sip some water.

Then I breathe. I use my hand as a metronome. I listen as I speak and, if something doesn’t sound right, I correct myself and try again. Then I check on the chapter as soon as I’ve finished it. It’s slower, but it’s a whole lot better.