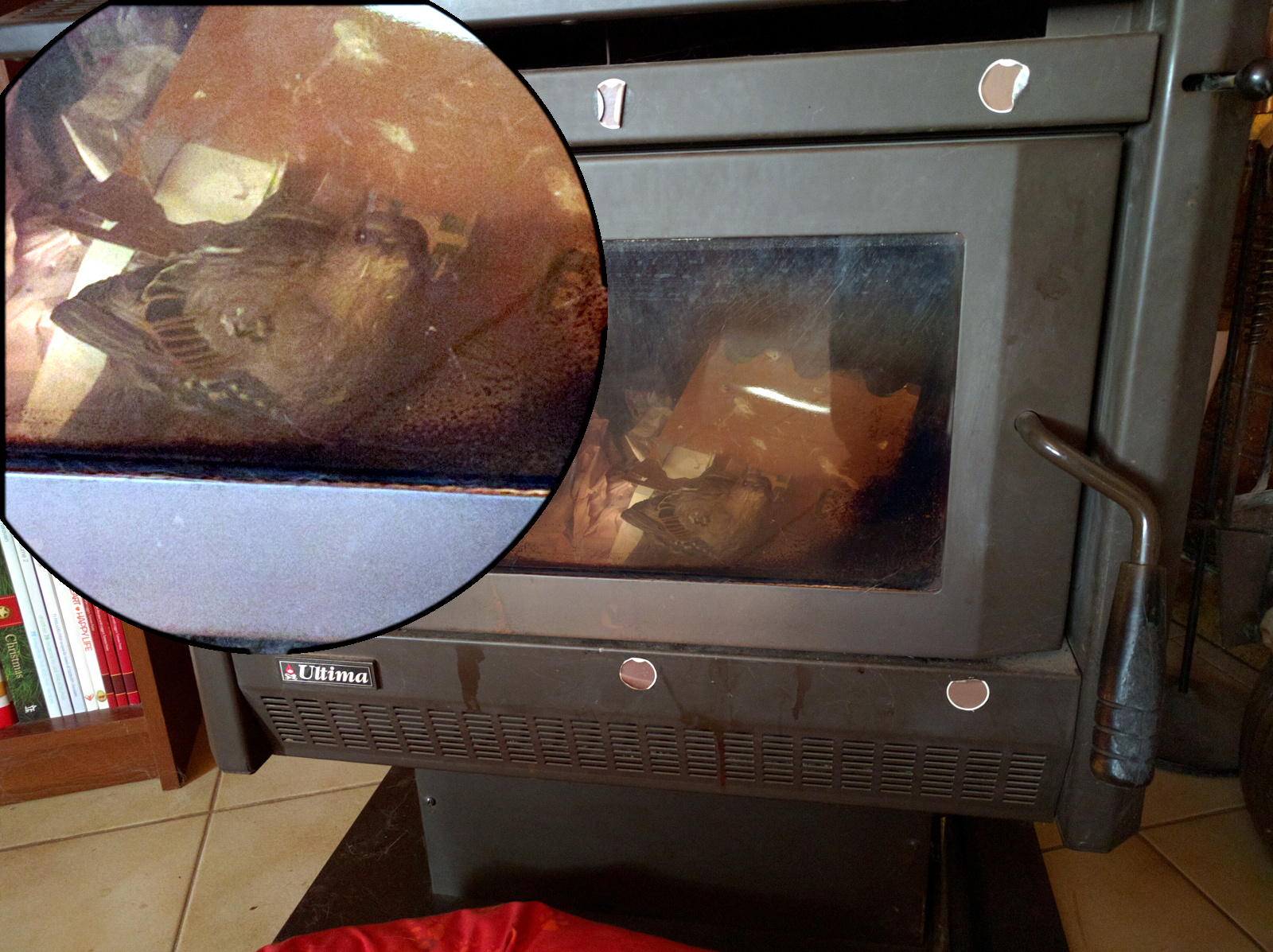 In art class, all the way back in high school, I learnt about the word ‘juxtaposition’, placing two contrasting elements next to each other. The clean-cut girl and the rough-as-guts loaner. The pristine rainforest holding a smoke-belching factory.

An innocent bird inside an unforgiving fireplace.

Yup, that was the scene with which I was presented when I came home last night. From what we could figure out, it had been in there for a few days, since we had heard noises on Monday and Tuesday, but thought nothing of it.

I figured the best course of action was to don a pair of gloves, open the side door, catch the critter and put her outside.

Very, very slowly, so as not to spook the bird, I opened the fireplace, just enough to get my hand in. Very, very slowly, I pushed past the scraps of wood and such left over from Winter, and reached toward the bird.

Vvvvoom! Very, very quickly the bird whizzed past my arm, up and out into the kitchen, missing the wide open door to freedom altogether.

I found her perched on the top of a pelmet, looking at me with those suspicious black eyes, ready to fly should I get too close.

I got too close.

Cue ‘Yakety Sax’, fast forward and watch a goof running around after a bird, trying all manner of Dick Dastardly devices, like tea towels, fish nets, the hat rack, to coax the poor thing outside.

On the ceiling fan, on the liquor cabinet, the herb rack, pretty much every light fitting, behind the dvd case, on a few picture frames, up on the door to that led outside (Yes! Yes! NOOOO!), on the hat rack, up behind the oven, I’m chasing her and she’s deftly avoiding me.

At one stage we were nose to beak. “Come on, birdy, do yourself a favour and go out the door,” I said, pointing to the big rectangle of light.

The bird just did that little head cocking thing they do and scurried behind the fridge.

“Hey, cat! Cat! Help me out here!” I said to my feline who had come in from the open door.

I figured that, hey, the bird will be more scared of the cat, so would naturally want to fly in the opposite direction.

On seeing the bird, however, the cat hunched down, quivering like a ninny, and bolted outside the door. Thanks, cat.

How did it end?

After about half an hour of furious up-down-in-and-around, she settled on a shelf up near the stove-top. I used the fish net to distract her from the front while I moved my gloved hand up the back.

I’m guessing she was very tired – hey, that makes two of us! – and she merely cowered. Now I was in a position to pick her up, but I was over-extending. Using the fish-net, I managed to pull a stool over to me, slowly got on top and very, very carefully picked up the beast.

She was as light as a feather. She did not struggle as I took her outside, only looked at me with the tilty-head and black eyes.

She pecked my finger and flew away in a flurry, without so much as a ‘thank you’ or ‘goodbye’.

Wifey came home about two minutes after that, while I was up inspecting the flue (which was intact, mind you, so the bird must have squeezed her way in), wondering why the house was in a state, why there was a fish net in the kitchen, the stools scattered about, dust that was on the floor.

She looked the picture of perfection, having just had a hair cut, nicely shaped, smooth, polished (and so was her hair), and there’s me: sweaty, hot, fuzzed up with a feather or two sticking to me. How’s that for a juxtaposition?